Peter Ham is stepping down from the Brantford Blast after 16 years as owner. Ham has been the momentum behind a local hockey franchise that has generated excitement for hockey fans and inspired generations of young hockey players to take to the ice.

Notable Blast alumni include Brent Gretzky, Chad Spurr, Brett Leggat and Joel Prpic. The Blast has had many achievements since their start in 2002 but 2008 was a highlight for the hungry team. 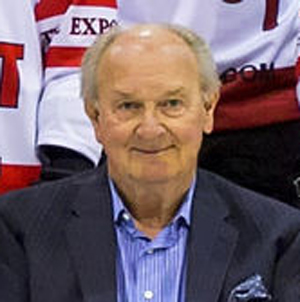 In a recent Brantford Expositor article, Ham was quoted as saying that winning the 100th Allan Cup Canadian senior A hockey championship “was a dream come true.”

In a public thanks to Brantford on the Blast website and social media channels, Ham reflected on the impact of the Blast, both locally and beyond.

“When we started in 2002, our Brantford Blast was more than just the city’s newest hockey team, it was another step in the revitalization if the city and a new tenant for the Brantford Civic Centre. It would play on a national stage in a boomtown city and provide another opportunity to come together.”

Millards has been a longtime supporter of the Brantford Blast. Martin Dixon from Millards says that Ham’s contribution to the city was important and that his presence as owner will be missed.

“Peter’s contributions to our city and our sports culture are substantial. His work ethic, energy, commitment and integrity gave the Blast a solid foundation from which to grow. I have no doubt that Peter’s contributions will continue in one form or another but his legacy will forever include establishing world-class hockey in Brantford and winning the the top tier Canadian senior hockey league in the province.”

The Allan Cup Hockey team is now for sale. Ham has a few candidates in mind to purchase the team although it’s unclear if a new owner will be found in time to save the next season. If not, Ham says the Blast will take a one-year leave until a new owner can be found.

Dixon is confident that the Blast will find a new owner to continue the sports dynasty and credits Ham for putting Brantford on the hockey map.

“On behalf of Millards and our city, congratulations to Peter Ham for 16 years of incredible  hockey memories and moments.”

Read more about Ham and the Blast in this Brantford Expositor article: 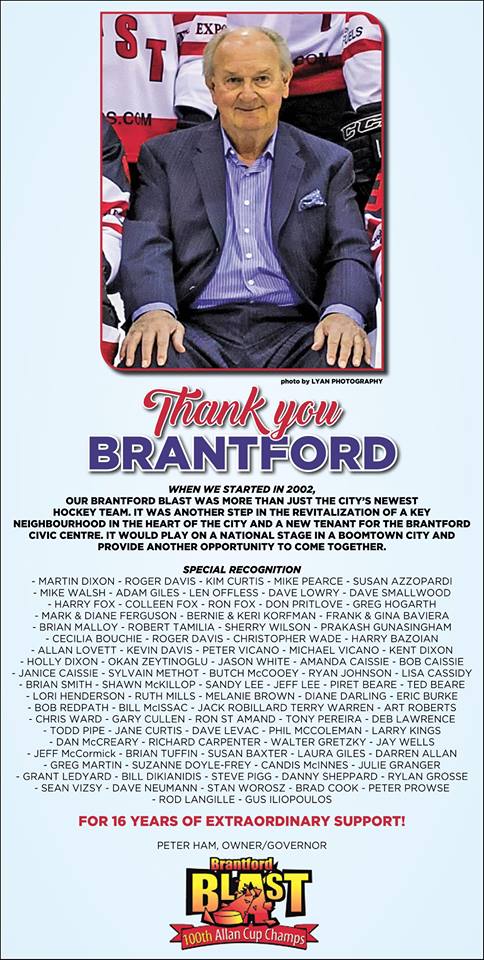