Lowered Electricity Bills, Free Drugs & Rental Caps. What Else Does The Ontario Budget Mean For You?

Ontario’s books have been in the red for almost a decade. The new $141 billion Provincial Budget announced on April 27th by Finance minister Charles Sousa puts us back in the black, although it doesn’t solve the debt problem.

John Carr, CPA, CA and Partner from Millards Chartered Professional Accountants in Brantford encourages Millards clients and the public to download and review it.

“The Budget does not include any changes to Ontario’s personal or corporate income tax rates however it does offer a number of benefits for both young and old. Those who make use of the health care system and anyone who owns or rents a home or pays for electricity will benefit.”

The provincial books are balanced for the first time since 2008 but that doesn’t mean borrowing has stopped altogether.

Ontario will become the first province to offer free drugs to everyone 24 and under. Approximately 4,400 prescription drugs will be covered and the co-pay for some seniors will also be reduced.

A break for paying back OSAP loans

The new Ontario Student Assistance Program (OSAP) will replace many existing programs with a single up-front grant. Students will not have to start repaying the provincial portion of their OSAP loan until they earn a salary of $35,000 per year. The current rate is $25,000.

A reduction in hydro rates

Announced last September, The province will cut electricity rates. Their plans includes an eight per cent cut of the provincial portion of HST. Earlier this year the province announced it would add another 17 per cent cut by essentially extending the debt.

The Liberals will extend the province’s rent control provisions to buildings constructed after 1991. The budget also introduces a tax on foreign-buyers of real estate in the Greater Toronto Area in an attempt to cool soaring real estate prices.

The budget added some details to the plan announced in September for the creation of 100,000 child care spaces over five years. The plan offers subsidies for up to 60 per cent of the costs of childcare for low-income earners.

It will cost more to smoke… again

The price of cigarettes will increase by $2 for carton of 200 cigarettes. That translates to approximately 25 cents per pack.

The Liberals have pledged to streamline tax credits for caregivers of ill loved ones into one non-refundable program starting in this tax year. In addition, the province will spend $20 million on respite care for dementia patients. They also plan to increase the number of seniors’ centres in Ontario.

The province is improving mental health services in areas from elementary schools to jails to seniors centres. The $73 million pledge will increase OHIP-funded access for ailments like depression and anxiety. The new promise will also create one-stop mental health hubs for young people so they can access a suite of services on a walk-in basis.

Moving towards Truth and Reconciliation

The budget introduces a variety of initiatives designed to improve relationships with indigenous people including more funding for schools and postsecondary education in Aboriginal languages. The budget also amends the Public Service Oath of Office in an attempt to acknowledge treaty rights.

The province has promised a new tax credit for seniors who use public transit. This follows the federal government cancelling a similar credit for all Canadians. The tax credit will provide a refundable benefit of up to 15 per cent to a maximum of $130 a year for transit costs. The new program starts July 1st.

Do you have questions about the Federal Budget Commentary or the 2017 Provincial Budget? Millards has 7 Southern Ontario locations to serve you. Contact us today and find out more about our wide range of accounting, auditing and assurance services.

A partner with Millards since 1988, John Carr’s practice areas range from negotiations and tax planning for mergers, acquisitions and divestitures to reorganizations of corporate and other business structures. He has a variety of skills sets including expertise in commodity taxes, general corporate tax planning and estate and will planning. 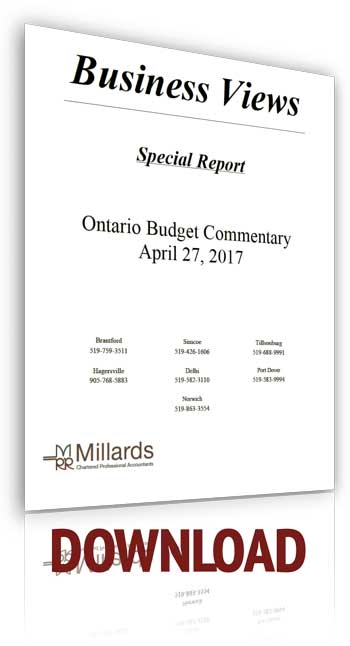